Schedule a workshop at your church, school, or parent’s group

For those who would like to conduct an event for your parent’s group or youth groups to help them understand their motivational gifts, contact Yvonne Williams to schedule a training or speak to your group.

In this 60 to 90-minute work shop you will learn why children respond to life the way they do based on the Romans 12:6-8 motivational gifts that we are all born with. Topics of discussion include: 1. Scriptural foundation for the gifts; 2. Purpose and Description of each of the seven gifts: Exhortation; Facilitation; Giving; Mercy; Prophecy; Service, and Teaching 3. How to identify your child’s gift by examining their character and personality traits; 4. How to develop your child’s gift; 5. exploring challenges of each respective gift.

Who will want to be trained on the motivational gifts?

She began teaching youth many years ago and has taught all ages, but especially loves ages 8-11. This is where she learned about the motivational gifts and how they positively impact youth once they understand why they respond to life the way they do.

Her love of children caused her to work to prevent the commercial sexual exploitation of children (CSEC) and today is considered a fore-runner and expert in the anti-human trafficking movement. Yvonne has spoken across the United States since 2004 bringing education and awareness to people about the issue of (CSEC) and how to prevent it.

Some of the many venues where she has spoken include college campuses, churches, schools, conferences, the Washington Times, political round tables, panels, and the United Nations. Yvonne is a seasoned speaker and panel presenter and loves interacting with children. She has been interviewed on television, radio, and written numerous articles about the issues of CSEC.

Yvonne has met with legislators about issues pertaining to children such as mass media’s influence and child pornography, has led campaigns and been engaged with others to end media offerings of child themed pornography on pay-per view channels and social media. She is a staunch advocate for the well-being of children everywhere. She partnered with A Bridge of Hope Ministries and led a youth campaign, “I Promise to Do My Part” garnering over 6,000 signatures of youth and adults across the USA taking a pledge to end human trafficking in their cities.

“Children are a gift from God and we must honor them and strive to protect their innocence and dignity,” she often tells her audiences. “I believe we can end child abuse because I believe in the power of love and have seen it in action.”

Williams was awarded the “Professional Advocate of the Year” by the Tennessee Conference on Social Welfare in 2012, the “Visionary Award” by Trafficking in America Task Force in 2014, and screenwriter of the 4-time award winning feature film, A Dance for Bethany, about a 12-year-old runaway with a dream to become a dancer. 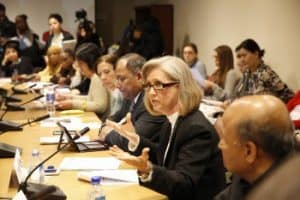 Yvonne Williams is co-founder with her husband, Marion of Trafficking in America Task Force. After ending her full-time work with the NGO she now serves on the Advisory Board of TIATF for CEO Jerome Elam. Williams has coordinated four National Conferences held from 2011 to 2014 and was co-host with husband, Marion, of the TIANow weekly television program in 2011 and 2012 in Nashville, TN. As one of America’s leading advocates on human trafficking, Yvonne travels throughout the country educating and inspiring people to work to create a culture free of slavery and sexual exploitation. Some, but not all, of her notable presentations include:

Yvonne also has spoken at churches, local service organizations, businesses, etc. and has been interviewed by numerous television and radio programs about ways to prevent human trafficking. She is the recipient of the Middle TN and the State of Tennessee’s Professional Advocate of the Year Award of 2011-12 by the Tennessee Conference on Social Welfare, and the Visionary Award presented by TIATF in 2014. Yvonne G Williams is a contributing writer to the book: Human Trafficking from a Feminist and Transnational Feminist Perspective, released in 2017 and is featured in a Hollywood Feature Film Documentary about Human Trafficking in Florida to be aired in 2017, produced by Ralph Guzzo, Directed by Ben Brothers.