Hiro Kawaguchi, the class clown, has the gift of exhortation

I loved creating the character, HIRO KAWAGUCHI, who always adds a light-hearted and jovial element to the group. That’s what Exhorters do. Hiro is always in a good mood and labeled by his teacher as the class clown. He’s very positive in nature. His wavy blue black straight hair never looks combed. He loves being a part of Anna’s friends and actually has more friends than Anna does.

Hiro loves to be the center of attention and has no problem saying yes when the teachers ask for volunteers to act or recite something during class. Mr. Henderson, the second through fourth grade teacher, has to stay on Hiro to get him to do his math. He just doesn’t like it. But, the drama teachers can’t wait to see him. When the school play is written, a part for Hiro is always considered. He’s the first to raise his hand and say yes to accepting a role!

Hiro’s friends are the targets of his playful and teasing antics as are his older and younger sisters. Playing practical jokes on his friends is as much fun as acting. Hiro likes animals just like Cayden and Daniel do and has a mix breed rescue dog his same age, eight. Dogs become little humans to him. And, when he invites his friends over to watch a movie, he’ll always suggest real and true stories on TV. He especially likes to play gangsters with his friends and gets his ideas from those in the movies.

Award ribbons and trophies are all over Hiro’s room. He generally wins the prize for being the best at whatever he does. Cayden and Daniel really like Hiro because he encourages them a lot. They tend to be more needy than others for encouragement. Hiro frequently reminds them, “You can do it”, because he understands their tendency to feel low, even when others may not. While he loves to lift up and motivate his friends, he often challenges them. For example, Cayden is the target of frequent bullying and has a hard time defending herself because of her mercy gift. Hiro will challenge her to stand up for herself in order to help her get strong. His friends love the encouragement he gives them. It makes him feel really good to help them know how to overcome. That’s because of his how to personality. Hiro will always give his friends three steps to getting something done.

Regarding how Hiro likes to learn, give him a project to do, such as plant a flower, and he will instinctively understand spiritual growth. He discovers insights from human experience, not as much from a text book. Even though he likes to tease his friends they all love him and are drawn to his charismatic nature. Hiro has many talents and he loves attention. That’s why he has no problem getting up in front of a crowd to perform…and like it, unlike Jesse who cringes at the thought of getting up in front of his friends!

Hiro has no barriers when it comes to working with Anna’s friends in the SBS club (book #2). He can work with a single friend or in a large group. He is impulsive and sometimes will interrupt others when they are talking. Anna has to always jump in to speak because he loves to talk when the group is together. Hiro is very expressive. The group listens to what he has to say when he speaks. He likes to see progress and gets discouraged at times with the lack of it. Hiro is not a child who will save anything, including all the candy he collects when he goes trick-or-treating on Halloween.

Exhorters are fun to be around because they are so joyful and positive in nature.

Buy this book for your Gifted "Exhorter" 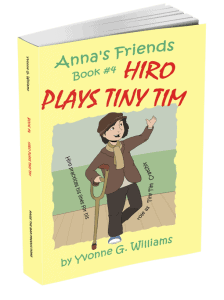 In Book #4, Hiro Plays Tiny Tim, focuses on the motivational gift of exhortation. One of the primary identifiers of a child with the gift of exhortation (encouragement) is that they actually enjoy getting in front of people whether to read a story, sing a song, or act in a play.

No one can resist being friends with this zany character!