Meet Cayden, Anna’s friend who has the healing gift of mercy 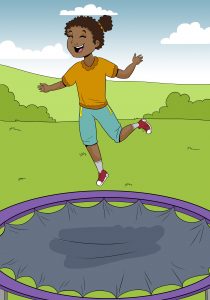 Alleviating suffering is the motivation behind the gift of Mercy. You will love CAYDEN HENDERSON.

She was the new girl in school in second grade and her daddy is the school teacher for second through fourth grade.

Cayden has a rather large doll collection, in fact she has almost every Barbie and Ken because her mother was an avid collector. As she grows up we’ll discover that Cayden likes to read love stories.

Due to her tender and loving nature, Cayden will cuddle up to an adult, especially older ones, and with her dog, Tiny, a 150 pound Great Dane. She smiles a lot because she’s genuinely joyful, a happy girl.

As a mercy person, Cayden experiences a lot of feelings and that makes it hard for her to communicate on deeply personal topics. She’s quite emotional. Cayden lost her mother in the summer before second grade.

They were really close and now that it is just her and her daddy, she’s getting closer to him. As a teacher, he’s helping her to express better.

Maria jumps in a lot to support Cayden when she is being bullied by the class bully and does her best to encourage her too. She just can’t stand up for herself so her friends often come to her rescue.

Mrs. Johnson, the school principal watches her students closely. She notices that Cayden takes up time with students that others in her class do not like. That’s because she’s attuned to their feelings. She is willing to deal with those who have needs that most people feel very uncomfortable working with.

This trait helps her identify those who might be smiling on the outside but crying on the inside. Cayden can sense distress and is attracted to people in trouble and really wants to remove their hurts and to bring healing.

She is sensitive to inconsiderate words and actions and is often closed to insincere and insensitive people.

Mrs. Jules is Cayden’s neighbor. She lives by herself and has no family. Cayden spends a lot of time with her. She is a good listener and wants Mrs. Jules to be happy.

She doesn’t want to see her unhappy. Her empathy can become detrimental so her father is always helping her learn how to deal with it.

Cayden is a good girl and minds well. She will always greet her friends with a big hug, and takes care to speak kind words. Just the mere thought of children going hungry or suffering, causes Cayden to cry.

Cayden is the first one to attend to a friend when they fall or get hurt. When Abbey, a new girl who has epilepsy, moves from California to Alabama, Cayden takes special care to make her feel welcome and stays close by her side. They both like to roller skate.

People love Cayden because of all the love she gives them. She is the child that says the right thing at the right time, she’s soft-spoken, easy to talk to, responsive to people, a good listener, peaceable, and agreeable. Cayden is a follower.

Do you have a mercy child? You are blessed but have challenges, especially if your child is a boy. Their tender nature make it hard for them to express and they tend to keep things inside, sometimes to their detriment.

Buy this book for your Mercy person 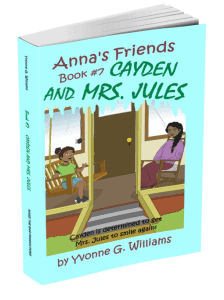 Meet Cayden, Anna’s friend who has the healing gift of mercy
Alleviating suffering is the motivation behind the gift of Mercy.