Jesse’s gift of service is one of great love 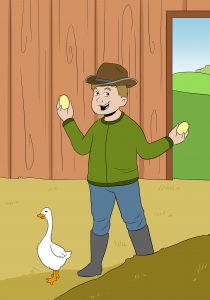 Jesse’s gift of service completes the circle of Anna’s friends because it is a doing gift. He has beautiful dark curls, and big dark brown eyes. He has a pet frog named Gino and a pet cat named Oscar. Jesse likes to hang out with his parents and do what they do. He is also Anna’s first cousin. Their moms are sisters and they go on vacation together every year. Since he is a bit over weight he is often teased by his peers.

Jesse likes the small group of friends. He uses his artistic abilities (he really likes to color and draw) to  create and make gifts for them because he wants to please them. This pleases him as well. Jesse remembers that Anna’s favorite colors are purple and green, and that Maria doesn’t like green beans.

At school Jesse’s gift of service prevents him from doing book reports, show and tell, and anything else where he has to get up in front of a group. He does not like to stand up in front of people for any reason. He likes being in the background and loves to help with practical tasks like helping his mom load the dishwasher, setting the table, helping his dad clean out the garage or pick up limbs in the yard.

This sweet-natured friend is always following Anna around and wanting to work together with his cousin. He’s always asking her for jobs he can help with.

Anna knows she can trust Jesse because he can work alone without supervision and never takes into account being weary when he works. Jesse has a real capacity to be involved in many activities, but often commits to too many which causes frustration.

Like Cayden, Jesse can easily detect insincerity. He is willing to let others have the credit for things they do because he does not like being singled out. Jesse is loyal, sincere, tolerant, faithful, and devoted to his friends. They see him as easy going, likable, congenial, and inoffensive. Jesse is a really good listener and won’t be critical. The word no is not in his vocabulary.

Jesse’s gift of service makes it hard for him to read or follow directions when he is given a job to do, but will when all else fails. Sometimes Jesse will jump in too fast when a call for volunteers goes out and that makes him appear to be a bit pushy. When he does not sense sincere appreciation he is easily hurt.

Is your child always wanting to help you? You have one that has Jesse’s gift of service. Help him learn to choose his involvement carefully and when to say no or he’ll burn out fast in life.

Jesse is so eager to help! Get this for your server-gifted child-or for yourself 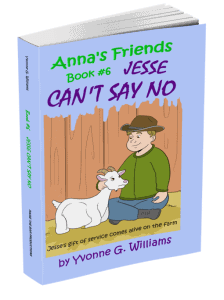 Jesse is so eager to help that he makes matters worse many times when he jumps in to help when he’s not supposed to.
Your children will enjoy this fun loving story about a little boy who just can’t say no!

Next a Much-Needed Gift - Mercy