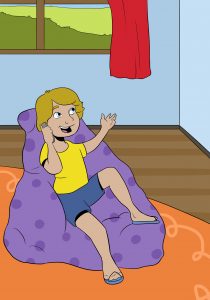 Anna’s friends are each uniquely different. Daniel’s gift of Prophecy, (he’s been her neighbor, friend, and classmate since they have been on earth), has similar traits to Anna’s gift of facilitation. The pair went on outings together as toddlers and learned to walk and talk together. Daniel is quite lanky and has sandy colored hair, and only likes to wear blue jeans and T’s, even to dress up occasions. His parents are divorced and he has a younger brother named Pete.

Daniel is a realist so much so that he does not have a good imagination, in fact he truly dislikes fairy tales.

Daniel’s gift of prophecy is based on truth. When he reads he only reads things that are real and that interest him. He and Anna have a hard time communicating sometimes because she has a very good imagination.

Cayden doesn’t know how to take Daniel. Even though they are both extremely sensitive, he pushes his friends away sometimes. He’s sometimes too frank and almost harsh with his friends and that makes his friends misunderstand him. This makes them think that he is not interested in them as individuals. But, because of his sensitivity Daniel is usually depressed and negative, especially toward himself, and Cayden can sense when he is struggling. It’s hard for him to have intimate personal relationships because he also has bold and very strict standards for himself. But he and Cayden are becoming good friends.

Don’t give Daniel toys to play with. He’ll just kick them out of his way. He is very active though.

If the school has just been professionally cleaned and the hallways are spotless, Daniel will find find the 1/2 inch spot in the hallway that the cleaners missed. He has to really look hard to see the rest of the clean hallway.

Daniel is very opinionated, impatient, and more serious than lighthearted about life. He is able to make quick decisions and want things done right. Daniel’s Sunday school teacher, Mr. Abercrombie, helps him work on being a little more positive, patient, and tactful. He knows Daniel struggles to keep a tender, loving heart, but is a real blessing in his Sunday school class.

Do you have a child that has Daniel’s gift of prophecy? If so, they need loads of encouragement to build their inner worth. God works hard to tear them down so they don’t resist using their gift. They must learn to not put a lot of weight into what others think of them. 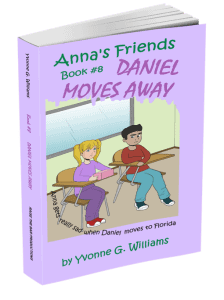 Do you have the gift of prophecy like Daniel?

Daniel is always correcting Anna and likes to give her advice about what not to do in all of her projects.

Daniel is a realist so much so that he does not have a good imagination; in fact, he hates fairy tales. When he reads, he only reads things that are real and that interest him.

Book #8, Daniel Moves Away, is a story about Daniel, Anna’s neighbor since they were both born. When Daniel moves away, she must deal with the absence of her life-long friend, while Daniel is forced to deal with the school bully, making new friends in the process. His gift of prophecy comes in handy as he adjusts to his new surroundings.

Daniel exhibits many qualities with one who has the gift of prophecy. You might have these gifts too.